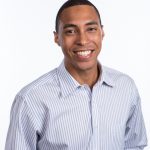 Torin Perez ’09 is a Diversity, Equity & Inclusion consultant on a mission to inspire authenticity and inclusive leadership in the workplace. Since 2015, he has facilitated learning and development experiences and spoken at more than fifty colleges, conferences, organizations, and Fortune 500 companies. He is the author of Who Am I to Lead? The World Is Waiting for You and his writing has been published in Wiley’s award-winning Leader to Leader Journal, and IHRIM’s Workforce Solutions Review. He is a One Young World Ambassador and inaugural class member of the TED Residency, an incubator for breakthrough ideas.

Originally from Brooklyn, New York, Torin ’09 discovered Lafayette when he was chosen to be a Posse Scholar. When he was a student here, he was involved in just about everything: from performing during ISA’s Extravaganza, to serving as an R.A, leading within several on-campus organizations including Brothers of Lafayette, and taking home the Intramural Basketball Championship during his senior year. He also served as a Gateway Career Services Ambassador and was selected for several summer internships and externships. Along the way, he changed his major several times, finally landing on Psychology, with a Minor in Economics & Business. Most of his closest friends are Lafayette grads, and he recently welcomed a little leopard into his own family, his 1 year old son, TJ.

Our Pulse Our People